skip to main | skip to sidebar

Ah, Arkansas.  What a year you've had.

(And who's gonna road trip with me to experience that BBQ in Marianna?)

Warning: Quitting Facebook may lead to new posts on your dead blogs.

Hmm.  Here's a Fuzzy's Find for ya:  I'm finding that if I stay off that black hole of time website, I actually want to communicate with the world a bit.  I make phone calls to friends, and I think of things I could write online.  Amazing.  That alone is a good reason to keep my account deactivated.

I just ordered some specific materials for a brave project:  I am going to wipe gel stain all over our nasty 1980's oak vanity and try to turn it into a sleek lovely modern espresso masterpiece.

Here's my inspiration (Found via Pinterest in that mysterious way that I can never reproduce... how did I come across this page?  NO IDEA, I was just in that Clicking Pinterest Fog and this emerged from the mist.)  After a phone search revealed that my little town does not offer the necessary General Finishes Java Gel Stain, I was about to pluck down the bucks on Amazon as the page above recommends.

But then I remembered!  I'm cheap and never quite satisfied unless I know I got a steal!  And while this is already a cheapskate's dream remodeling project,  I found a way to make it even less expensive.  I share this today, before the purchase has even arrived in the mail, because I think everyone should be made aware of this:

Stuff On Amazon Can Often Be Had Cheaper Elsewhere.  Not always, and especially not if you have Prime, but sometimes, it pays to do a little hunting.  In this case, hunting led me to notice the name of the Amazon seller with the best prices (see that little "sold by Woodcraft" off to the right?).  A search led me to Woodcraft.com, which saved me about $6 over the Amazon cost (including shipping).  Great sleuthing, right?

Oh, but that is not the end for the truly cheap and patient shopper.  Another search, this one for "code woodcraft.com," led me to that joyous prize, a FREE SHIPPING CODE WITH NO MINIMUM PURCHASE.  And suddenly my cost went down another eight dollars.  Fourteen dollars saved with just a few minutes' googling!

Time to tape off that vanity and scrub it out.  When that stuff arrives, things are going to start changing in that nasty 1980's bathroom... and I've saved almost enough to buy that curved shower curtain I think the vintage tub is calling for.  It's about sick of the glass shower doors...

Wow.  It's been a long, long time since I've shared any finds here.

That may be changing, as I just inactivated my Facebook account to see if it will help me better my life in 2013.

However, you'll find an awful lot of my "finds" from the past year or so at my Pinterest account, if you feel a need to see a bit of what I've found fascinating lately.

I'm Clark, the traveling kid from Mr. Burleigh's first grade class in Winter Park, Florida. I arrived at the Smith's house to visit Arkansas and the Ozark Mountains about a week ago.  Kim, the Smith mom, is letting me use her blog to share about what I'm seeing and learning.

I'll write about fall in the Ozarks soon, but first, I want to share about this weekend... we got to travel about 300 miles north to Kansas City, Missouri!  The Dove family let us play and stay in their house, and we also got to drive downtown to visit the historic part of Kansas City.  Pictures below!

On the day we drove downtown, we stopped at the Plaza area for lunch.  Here I am with some of the kids (we had seven kids on this trip, counting me!): 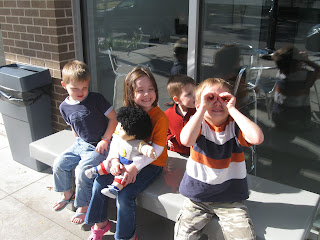 This is (L to R) Adrey, Gracie and me, Quinton (in the back) and Eshen.  They're great friends!

Here's three amazing old buildings I liked near the Plaza in Kansas City.  They remind me of castles! 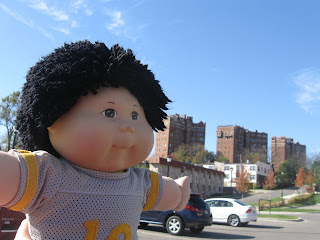 Our favorite part of Kansas City was Union Station.  It used to be (and still is) one of the busiest train stations in the United States!  Not as many people travel by train these days, so they use the extra space for museums, theaters, special events, and restaurants. 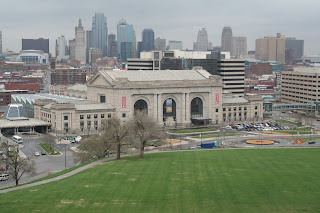 On the way inside, we spotted a giant dinosaur!  There were big dinosaurs in several places inside Union Station- they have a dinosaur exhibit there right now.  Some of them even moved and roared!  (I'm in the stroller in the first picture.  See how big that dinosaur was??) 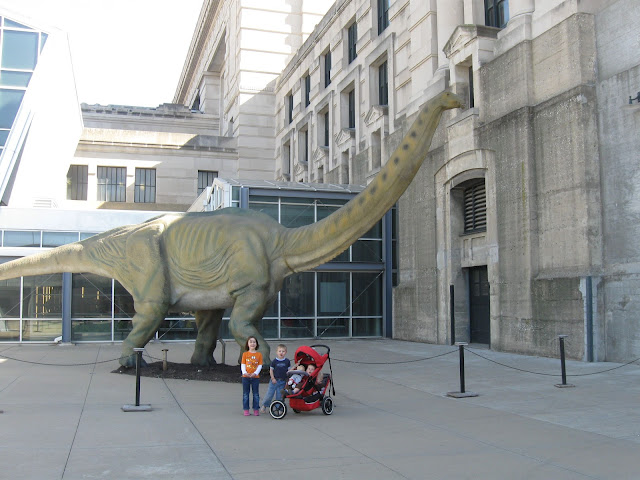 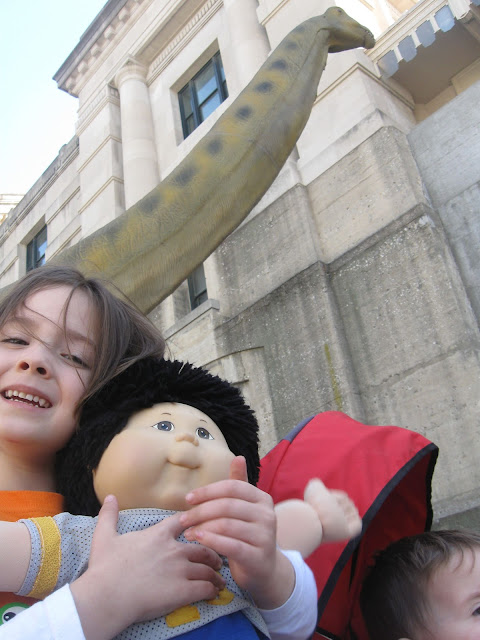 This is me in the main lobby of the station, which has been restored to look just like it did when it was opened in 1915.  The ceiling in this room is 95 feet high-- about 9 stories! 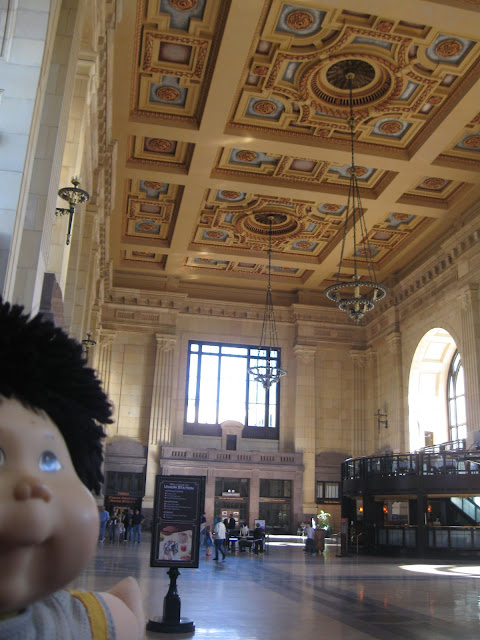 Inside the station is a special kids' science center called Science City.  We spent a LOT of time looking at the exhibits in there.  It was amazing!  Here I am checking out a real helicopter there: 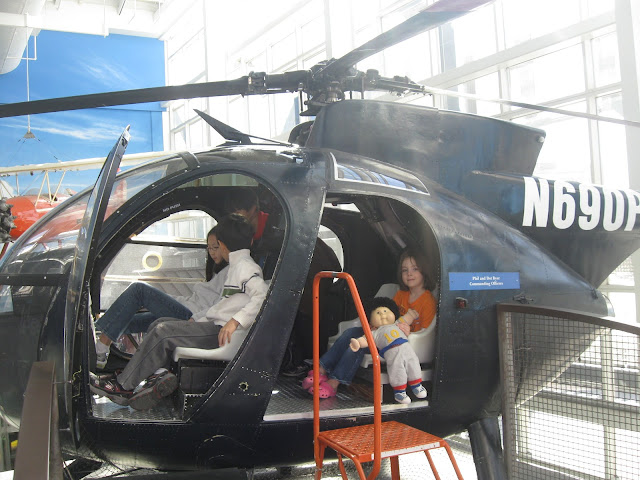 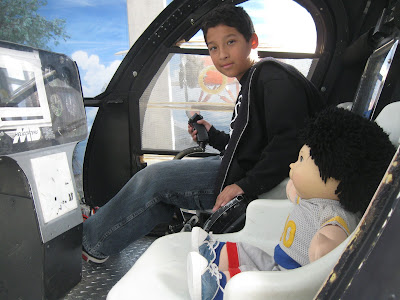 And here's a magnetic sign in the classroom area where my friends helped me spell my name.  (There was no R, so we had to get creative with a P and an upside-down V.) 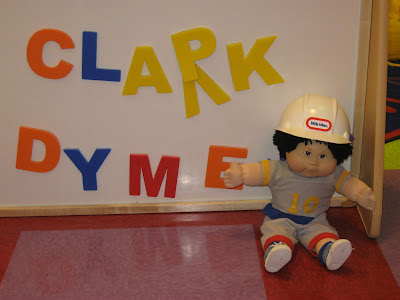 I really liked Kansas City-- and especially Union Station and Science City.  We learned a lot and had fun, too! 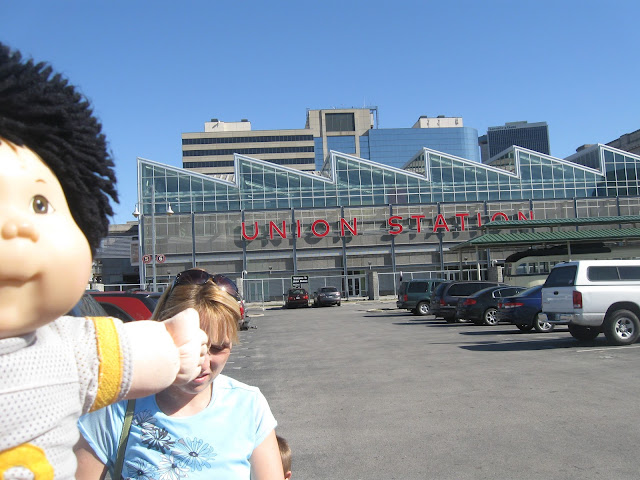 More later... It's fall in the Ozarks, and there are beautiful trees everywhere!

I miss you all, but I'm having a great time traveling.

My little boy (2 1/2 years old, without the slightest sign of interest in pottytraining) is the most rash-prone fella I've ever seen.  If he LOOKS at something irritating, he breaks out in a rash.  Diarrhea is the worst-- his skin instantly erupts into a pink mess that quickly becomes extremely painful, even BLOODY, if allowed to continue without immediate and effective treatment. 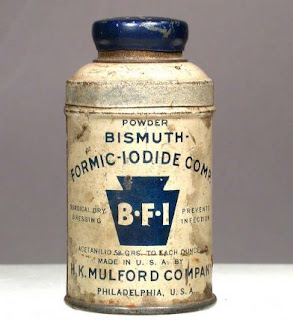 In my hunt for products to stop the diabolical diaper rash in its tracks, I came across this- BFI, an antiseptic powder that's been around since at least 1902.  It's not as effective as I'd hoped for the diaper rash-- possibly because pee comes along and washes it off too often for it to really work its wonders.  But take a look at its reviews on drugstore.com-  or on amazon.com.  People would walk miles to find this stuff!  It's amazingly effective for:
...the list goes on and on, once you start reading the reviews. 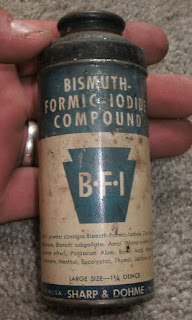 A quick look at the ingredients gives me three quick clues to its effectiveness:  menthol (mint), eucalyptol (eucalyptus), and thymol (thyme) are among its "inactive" ingredients.  (Here's a great post by Ozark herbalist Jim Long on Listerine and its use of the same ingredients.)  Now I'm not sure if these are natural or synthetic forms of those chemicals being included today, but I am sure that they were originally included in the formula because of the healing and germ-fighting properties those herbs contain.  Once again, a simple product with simple ingredients can blow away the doctor-prescribed drugs and chemicals that cost ten times as much.

Lucky for me, I found it easily (and cheaper than I could buy it online) at our fabulous local downtown pharmacy.  This is something every mom and pet owner ought  to have on hand.

(Images of old BFI bottles located via Google hunting on Ebay and the Natural Museum of American History.  Fun to see those!) Read more...
Posted by Kim at 1:04 PM , 7 comments

Homemade laundry detergent is a breeze. 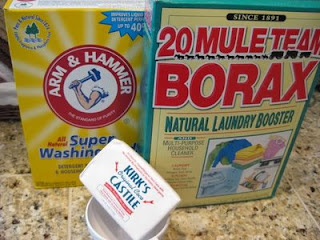 You, too, can wipe out 90% of your laundry detergent costs by making your own. It's not difficult and doesn't take long. I got the recipe from my cousin, and even my reluctant husband now admits that it works just as well as the storebought stuff; a quick Google search can teach you plenty about chemicals in commercial detergent that we'd be better off doing without.

Find a 2-gallon or larger container to hold your completed soap (I use a 5-gallon bucket and double the recipe).

While they're heating, grate your bar of soap (using whatever you use to grate cheese). When it's grated, dump it into the six-cup pot and stir periodically until dissolved.

While that's dissolving, dump 1/2 cup each of washing soda and borax into the four cup pot and stir until it's dissolved, too. When both pots are dissolved, dump them into your big container and stir, then add one gallon plus six cups of tap water, the essential oils if desired, and stir again. All done!

Put the lid on the soap and leave it for 24 hours. It should set up into a funky gelatinous mass. (Don't be afraid of it!) Use 1/2 cup per load in a top loading machine; possibly half that in a frontloader. That's it! Read more...
Posted by Kim at 10:24 AM , 4 comments

Here's yet another study that confirms the effectiveness of essential oils against bacteria and viruses... even ones that conventional medicine has a hard time fighting.

In this one, British researchers tested thyme oil's effectiveness against the deadly MRSA bacteria that's become so prevalent (and scary) in hospitals. (But you can read another one here. Or here. Or this well-referenced and thorough article here.

Just this week, we noticed that my four-year-old (who is apparently Mosquito Ambrosia) had received her first three bugbites of the season, up on her upper back. Unfortunately, by the time we noticed them, she had scratched them all raw and they were red with irritation and the beginnings of an infection. A day or two later, and the infection was spreading quickly away from the bites; we were out of town, and I was getting worried.

All I had with me oilwise was my little purse kit: lavender, tea tree, and a bit of an anti-infectious Four Robbers blend that is too strong to use directly on the skin. After some thought, I used a drop of lavender and a drop of tea tree oil, blended together on my palm, and applied to the bites and the red area around them with my fingertip.

We put her to bed in the hotel, and woke up the next morning with the redness and swelling significantly reduced. We're still treating it now that we're home; the infection's pulled itself into a boil, and the redness is all but gone, so I'm expecting to have this cleared up within a day or two. The only "medicine" I've used is the tea tree and lavender oils.

My sister's an RN and an oil skeptic (being thoroughly trained in conventional medicine makes one a bit suspicious toward natural cures, I think), and she was with us on the trip. I'm not going to rub it in, but I hope she noticed how quickly the oils handled our problem-- with no doctors' visits, no prescriptions, and no side effects.

I just LOVE my oils.

I find it, I like it, I post it here. Simple living, vintage goodies, recipes, gardening tips, old houses. Sound like too much of a mishmash for one blog? Probably so. But you'll have to deal with it.

Here's ye olde intro post, if you must read more.